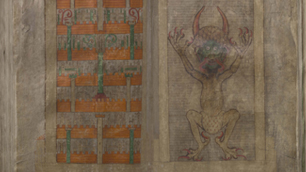 ~ 1210-1230
The Benedictine monk
Podlazhice
75 kg of knowledge of Codex Gigas, written predominantly in Latin, with an emphasis on the care of the body, mind, and protection of the immortal soul, amaze not only by size but also surprise with extensive content: Old and New Testament books are combined with spells, ancient stories, and medical works.
One and the same ingenious hand for a couple of decades had been making a unique combination of texts that exist nowhere else. The exceptional education of The Benedictine monk, a mysterious creator from Bohemia, whose identity has not yet been established, recreated the most courageous book in the early Gothic.
But there is something else. There is the supreme demon of the Apocalypse dressed in the skin of ermine, the symbol of the supreme power, depicted on the 290 page. The most interesting is that he does not rule Hell but is all alone enclosed in a cell. Nowadays the Devil hasn't ever been embodied on such scales, or at least entirely. This demonic figure was enough to impose fear on people in dark times.
However, Gigas Librorum instantly acquired the status of a sacral object and was hidden from human eyes. The governors tried to get it; the largest medieval manuscript was sold, stolen, and taken away. Finally, after dramatic travels, the Royal National Library in Sweden has become a modern house of the Devil's Bible.
IKONA RUSSIA
IKONA RUSSIA©2018, ALL RIGHTS RESERVED
[email protected] Mission Vkontakte Instagram / SITE MAP /
The use of materials of IKONA RUSSIA is allowed only with the tentative agreement of the copyright holders. All rights for images, texts and other content of IKONA RUSSIA belongs to their authors.