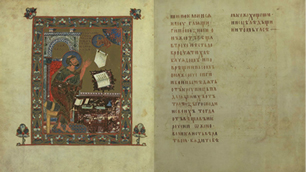 read
The exact dated manuscript, written on 294 sheets of parchment for the Novgorod posadnik Ostromir, is a rewritten gospel-Aprakos. It was created not more than for 32 weeks and goes back to that translation which was performed into Russian by Cyril and Methodius.
By the way, not everyone knows that theologians of that time believed that the praise to the Creator could be given in three languages, thus the feat of the first Greek teachers is difficult to overestimate.
Executed by Gregory Deacon "for the consolation of many working souls", the ancient liturgical book was used in Hagia Sophia, but, unfortunately, was later forgotten until the XIX century.
The Ostromir's gospel has infused the high originality of the Greek texts, which are vividly combined with the identity and self-sufficiency of the Slavic culture.
IKONA RUSSIA
IKONA RUSSIA©2018, ALL RIGHTS RESERVED
[email protected] Mission Vkontakte Instagram / SITE MAP /
The use of materials of IKONA RUSSIA is allowed only with the tentative agreement of the copyright holders. All rights for images, texts and other content of IKONA RUSSIA belongs to their authors.