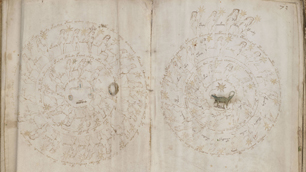 ~ c. 1401 – c.1599
Unknown author
The country isn't defined
The mysterious authentic manuscript without a name, sold by the Jesuit Order to a Polish bookseller Wilfrid Vojnich in 1912 still excites the outstanding minds of humankind; the author is unknown, the alphabet has no analogs, illustrations are grotesque.
What does it narrate? Is there another manuscript-key, without which it is impossible to read the text? Did its creator want to hide something important or is it a pure piece of art?
Nothing is known about its history during ancient times. 204 pages has been written without a single correction*, and the number of interpretations of 170 mysterious letters bewilders the best cryptologists. All this arouses suspicion, but one shouldn't doubt its authenticity. In 1666, in the Johann Marcus Marcy's letter in the Voynich's manuscript, it was said that Rudolf II bought it; further information allows to partially trace the provenance, but don't decrypt strange images of plants, obscure characters, diagrams and optical illusions. What they hide and what their message is – is so far a big mystery.

*Originally, there were 232 pages, 28 of which were lost over time
IKONA RUSSIA
IKONA RUSSIA©2018, ALL RIGHTS RESERVED
[email protected] Mission Vkontakte Instagram / SITE MAP /
The use of materials of IKONA RUSSIA is allowed only with the tentative agreement of the copyright holders. All rights for images, texts and other content of IKONA RUSSIA belongs to their authors.