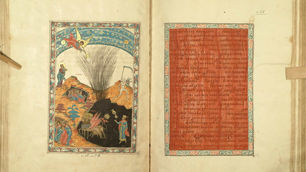 1625, Monks
The Kiev-Pechersk Lavra
The very first and only complete interpretation (analysis) of revelation by John the Theologian, which is extant from the holy Fathers of antiquity, has been performed by the Archbishop Caesarea.
Being allegoric and difficult to be interpreted, the Apocalypse needed explanation, so St. Andrew has presented the scripture in a new form. His work is divided into three parts. The literal meaning of the message is revealed in the basic one, the second one carries a moral purpose, and the third one bears an antagonistic character.
It is a great work allowing a sophisticated reader to understand how a mysterious book was interpreted during the early period of Church history (I-beg. IV. c).
The illuminated manuscript of the explanatory Apocalypse was published in the Kiev-Pechersk monastery in 1625 and is completely based on the interpretation of St. Andrew, which he composed between 563 and 614.
IKONA RUSSIA
IKONA RUSSIA©2018, ALL RIGHTS RESERVED
[email protected] Mission Vkontakte Instagram / SITE MAP /
The use of materials of IKONA RUSSIA is allowed only with the tentative agreement of the copyright holders. All rights for images, texts and other content of IKONA RUSSIA belongs to their authors.